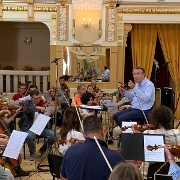 The Foundation for Global Arts, the nonprofit organization dedicated to fostering international understanding through the arts, is pleased to announce its support of the newly formed Rachmaninoff International Orchestra (RIO).

Founded by pianist, conductor, and composer Mikhail Pletnev, the RIO is composed of preeminent musicians from Eastern and Western Europe.

“Mikhail Pletnev has deepened his commitment to artistic freedom with his founding of the Rachmaninoff International Orchestra,” said Sergey Markov, RIO General Manager. “The orchestra has a vital role to play in bridging divides and inspiring peace through the universal language of music.”

The name of the orchestra was inspired by composer, pianist, and conductor Sergei Rachmaninoff, an artist who loved his country but left and did not return due to the political forces in his homeland. Like Rachmaninoff, the RIO is dedicated to the highest standards of performance and artistic expression.

The musicians of the RIO recently gathered in Bratislava, Slovakia for their debut recording under Pletnev’s baton – a suite from Swan Lake by Pyotr Ilyich Tchaikovsky and the Carmen Suite by Rodion Shchedrin, in honor of his 90th birthday this year. Forthcoming recordings include the piano concertos and symphonies of Sergei Rachmaninoff, in celebration of his 150th birthday in 2023.

The RIO is represented in Europe by Artists Management Company, and in China by Armstrong International Music & Arts. Performances and tours will be announced.

This is just a sample…